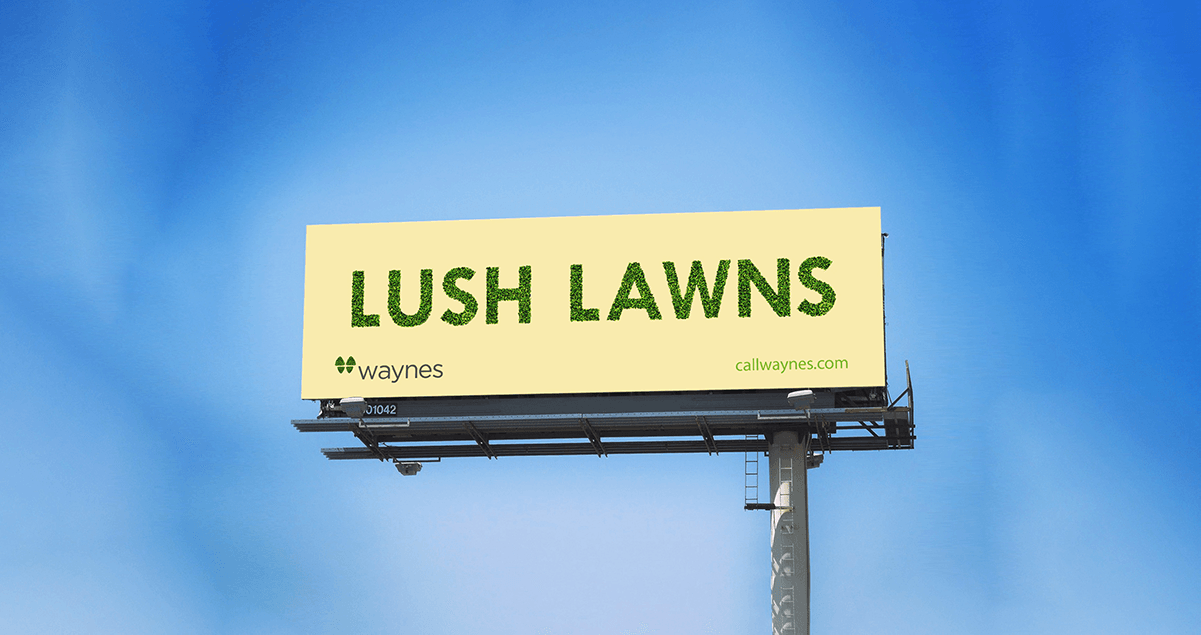 Waynes is in the top 30 largest pest control companies, part of a nationwide 8 billion dollar industry. Waynes’ ongoing billboard campaign has been an integral part of its quest to become a household name in the markets it serves.

Waynes partners with Lamar Outdoor Advertising to cover their communities in these massive messages. From monster-sized interstate billboard to smaller roadside boards around town, it's hard to miss evocative two-word phrases like "Pulverize Pests", "Lush Lawns", & "Mutilate Mosquitoes" in large grey letters. Simple and eye-catching, these boards were well-branded by matching the color of Waynes’ enormous fleet of trucks. While on the road, it was possible to see both the service vehicle and the advertisement promoting Waynes hand-in-hand.

Waynes wanted to refresh the billboard campaign to recapture people's attention. However, it was important to retain brand recognition the campaign had been building.

We started by writing new slogans. We added the new pest phrases "Tackle Termites" and "Annihilate Ants,” in line with the phrasing of the previous boards. We kept the original design elements for these additional boards while working on another round of changes.

We had a bigger plan for the next round of billboards. Not only did we want to extend the impact, but we also wanted to introduce two smaller service lines: Landscaping and Home Services. These were two service areas with untapped promotional potential for billboards.

For these, we used the color of the service icons from print materials, the website, and the trucks as the backgrounds. We only used these designs on digital billboard screens around town. It’s more common to use digital billboards as an opportunity to create more complex designs and photo-heavy designs, which is why going in a different direction had a greater ability to get peoples’ attention. By using designs that were big, bold, and used solid colors, they were more eye-catching for commuters. We were able to keep the Waynes branded yellow in the design and retain the previous layout so even though these designs were "new,” they remained consistent with the previous runs. Sometimes the smallest changes can have the most impact.

With a successful color-blitz strategy in place, it was time to return our focus to the yellow backgrounds. Waynes sold its Landscaping and Home Services divisions in early 2018 as it prepared to become part of Anticimex, the world’s largest pest company. While these services had a great run, it was time to update the billboards again. As a result, the campaign would focus on Pest and Lawn services exclusively. Phase three was then characterized by adding elements around the classic Waynes billboard design. This provided an incredible opportunity to highlight the Waynes Service Professionals, and create a Lush Lawns billboard featuring an actual Lush Lawn in the typography! We combined creativity and clarity for an effective series of billboards.

OneAscent is a values based investment firm located in Birmingham, Alabama. They have expanded all the way up the east coast and needed a new homepage, and series of new advisor mini-sites that could expand with the company's growth.

Baba Java has an awesome story, and they wanted a video that helped them share it with their out-of-state subscribers and people that might not have visited the café.

Baba Java is a specialty coffee roaster and cafe based in Hoover, Alabama. I redesigned the packaging for maximum impact on store shelves.